It is undeniable to admit that the Indian Premier League of cricket is a well-known and respected league. From their billions of television rights and appearances to salaries that are ranging in the millions and their 11-year long history, it’s no wonder why this team is world renowned. However – despite all this team’s success, they are being protested by farmers in India who are angry, drought-stricken, and fed up.

To be brief, two Indian states, Karnataka and Tamil Nadu, have been fighting for years over water rights in the regions of the Cauvery River. Though, tensions have been running higher due to farmers based in Tamil Nadu becoming more urgent about their demands due to the increase of drought conditions.

Now here is where the Indian Premier cricket team comes into play. To gain more publicity for their cause, the farmers began targeting the extremely high profile I.P.L due to their worldwide success and their global fanbase. Due to the farmer’s protests at in Chennai, which is based in the capital of Tamil Nadu, six of the Chennai Super Kings games, were forced to be moved to Pune, which happens to be a little over 600 miles away. 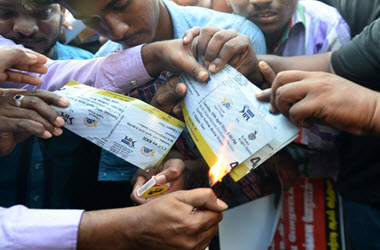 Protest Inside and Outside Stadium

While at first glance one might think that the protests were mild – the farmers managed to protest inside and outside of the stadium. This prevented the team and fellow fans from entering or even coming close to the stadium. During this event, police were called to put a lid on the protests and this lead to closed roads around the stadium and 20 protesters being arrested.

Despite the protests and the movement of the game, the Chennai Super Kings have finally made their way back into the cricket league after a suspension that was a result of corruption and match-fixing charges. Since these games were their first since the initial suspension, they were highly anticipated by the players and the fans alike. While the country is trying to solve the dispute between the two states civilly. The Chennai Super Kings will have to wait one more year before they officially can return to the cricket league and hopefully start winning some games again!

When it comes to the rest of the games that the Chennai Super Kings will play, cricket officials have decided to keep the idea of moving the games to different locations. This will allow for the players to be safe, to avoid fan riots from breaking out, and to allow the police of Tamil Nadu to start handling the protests in a safe way.