How One Player Guided a Win During the England vs. India Match 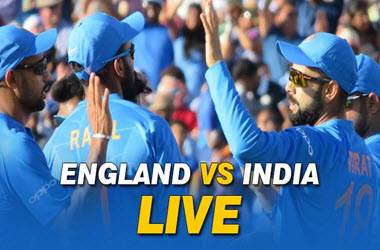 Alex Hales, a cricket player for England, leads the team into one of the most dramatic, attention-grabbing final-over wins that were seen in this season’s Twenty20 International match against India. During the match, England began to slip to the opponent which caused a 12-point difference between the teams. Many assumed once the difference became twelve at that point in the game it would surely be another loss for the English team.

Although Hales had a different plan. The player used his experience from his currently unbeaten 58 to change the table in the last minutes of the match. While England would need twelve points to secure a win – Hales went into action by hitting Bhuvneshwar Kumar for an impressive six points, followed by another four. Although David Willey was the player to score the final wins needed for the deciding factor for the Sunday match in Bristol.

England had a successful match against Australia previously during this season tournament. Although, after their winning streak, the English team was hit with a devastating match against India on Tuesday at Old Trafford. This is not too surprising as India has been playing a successful season with strong leads.

While in Cardiff, England realised that the intensive boundaries that India was known for playing this year would be a hard match for a spinner to overcome. That is why Jake Ball had his debut while Mooen Ali was placed on the sidelines. While Ball did have an impressive performance, he stood no match as he watched India strip away 22 from his final over. Then the ruthless team carried the same passion on the field during the match.

Hales, on the other hand, stepped up and tried his hardest to overcome the awkwardness of playing in the position four – all while trying to figure how to get a head’s up on India’s prominent spinners, Yuzvendra Chahal and Kuldeep. Despite being in front of a plethora of fans for India, England kept India on their toes of the majority of the first half of the match.

How Did Hales Lead England to Victory

It’s undeniable. At first, England looked as it has lost all hope of achieving a win due to the combined efforts of Kuldeep and Chahal, which created the shocking 12-point difference between the two teams. Additionally, the English players did misread some of the actions of the Indian team which caused even more opportunities for the team to achieve wins.

Nevertheless, Hales and Eion Morgan held strong and gave it their all to achieve the win that England desired. While Morgan provided an expectational show, it was ultimately Hales who started taking off points from Bhuvneshwar which lead to the action-filled win.

While the results of this match roved favourably for England, the only question that remains is will the team be able to create a winning streak during their next match or will they have to cut it close once again.