The Pakistan bowler, Mohammad Amir, will not be participating in the two test matches against Australia next month. The left-arm fast-paced bowler, who only managed to miss one Test since he returned to international cricket in early 2016, looks like he’s paying the price for his poor ODI performance during the 2018 Asia Cup, which resulted in his exclusion from the squad that will play against Australia. 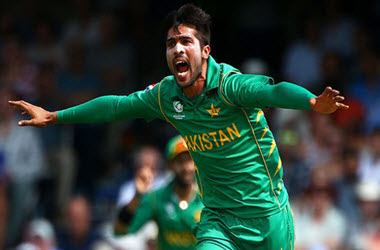 Amir went wicketless in the last 5 ODI’s and only managed to pick up 3 ODI wickets after the Champions Trophy final in 2017. He was extremely impressive in the 3 Tests played earlier this year where Pakistan faced England and Ireland. Amit managed to take 12 wickets with an average of 18.40. However, his bowling average in Dubai is far less satisfying where he only took 7 wickets with an average of 56.42.

There are several notable changes to the Pakistan cricket squad which was announced after their humiliating exit at the 2018 Asia Cup at the hands of Bangladesh, denying them a shot for the title on Friday against India. Their performance during the 2018 Asia Cup tournament was subpar. Numerous batsmen for Pakistan struggled to make runs, the fielding standards experienced a significant dip, and the spinners were extremely ineffective.

For the first time in more than a year, a key inclusion is that of Mohammad Rizwan, a reserve wicketkeeper. After Sarfraz Ahmed took over captaincy duties full time in all three formats, he managed to play every single international match in all three formats and has been the only wicketkeeper with the Pakistan squad. This now changes as the team prepare for their clash against Australia.

Wahab Riaz is back in the squad after questions were brought up over his fitness during his tour in the UK, as well as a host of other spinners, indicating the nature of the cricket pitches that the Tests series against Australia will be played on. There’s also no place for Mohammad Hafeez who continues to have severe problems with his bowling, making him an unreliable option for the upcoming Tests. Mir Hamza, the left-arm medium-pace bowler, made it onto the squad as he picked up a total of 278 wickets in 56 first-class games at an average of 17-74.

The first Test will start on 7 October 2018 in Dubai. The last time Australia paid a visit, Pakistan managed to win both Test matches. However, Australia managed to repay the favour at home in 2017, beating Pakistan 0-3.